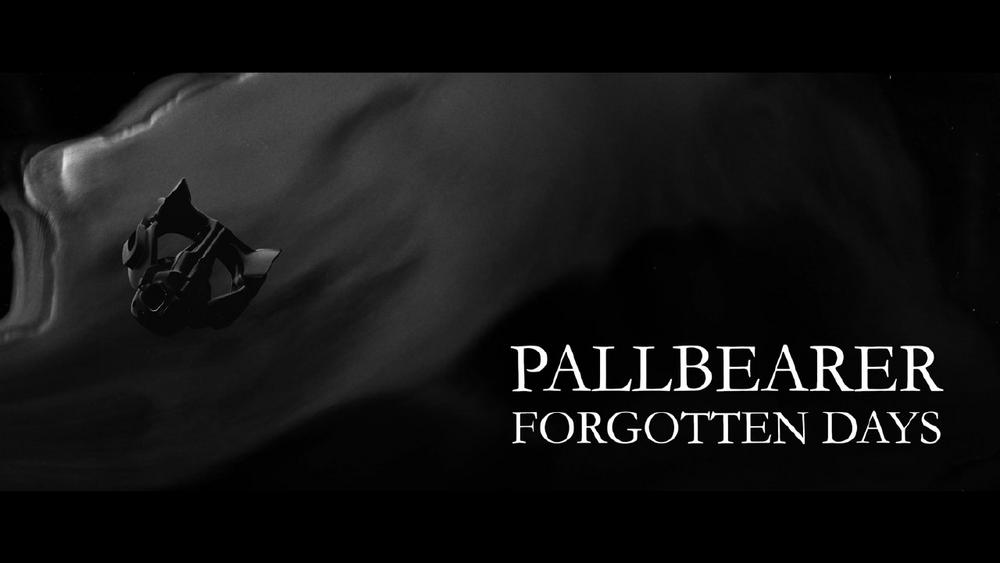 PALLBEARER, who recently announced the Oct. 23 release of their highly-anticipated fourth album, »Forgotten Days« (Nuclear Blast), have shared a black and white, cinematic version of the video for title track ‚Forgotten Days‘:
https://youtu.be/FV1oaYgktvo

The clip, which stands in stark contrast to the original version (https://youtu.be/OuH3pX8tqCg) that was released earlier this month, has echoes of classic science fiction films such as "Solaris," "Silent Running," and "Stalker."

“When Ben sent us this alternate version of the ‚Forgotten Days‘ video, we were instantly taken aback at how a simple color shift and change to aspect ratio transformed the feeling of the narrative,” explains singer/guitar player Brett Campbell of the Ben Meredith directed video. "This cinematic edition is dripping with oppressive claustrophobia, and in being stripped of color, deepens the sense of the unknown lurking in the shadows of the mind. We’re happy to share it with you today.”

The Little Rock-based band released the title track and original video (https://youtu.be/OuH3pX8tqCg) earlier this month, immediately earning praise for the “sweeping and melancholic” (Revolver) single. Stereogum said ‚Forgotten Days‘ is “warm and melodic,” Consequence of Sound declared the six-minute song “undoubtedly the band’s heaviest material since their now-legendary 2010 Demo” and Metal Injection added that it “has a crushingly sad aura about it and you’re going to love it.”

Campbell, in discussing what is the first glimpse of what’s to come on the band’s eagerly-awaited album, said: "’Forgotten Days’ is inspired by people in my family, and people getting to the age where people’s grandparents are facing the inevitable. Things that happen when you get old. It’s about your loss of identity while you’re aware it’s happening and how horrifying it is. I think it can also be applied to what makes you you."

Bass player/songwriter Joseph Rowland added: “»Forgotten Days« is us exploring what is natural to us. The songs tell me where I need to go when I write. We wanted to focus on songs that were visceral and enjoyable to play live – that our audiences would enjoy experiencing. We’re also getting back to more of the groovier and heavier elements of PALLBEARER. »Heartless« is fairly uptempo and technical. This one is a little more open, it hammers you.”

»Forgotten Days« pre-orders are available now (https://www.pallbearerdoom.com/forgotten-days). The eight-song album is available in a number of limited edition vinyl variants with physical bundles available via both the Nuclear Blast and Pallbearer webstores, as well as digitally and on CD/cassette. The title track ‚Forgotten Days‘ is offered as an immediate download with digital pre-orders on iTunes, Amazon Music and Bandcamp. Listeners can pre-save the album and listen to the title track on all DSPs: https://nblast.de/PallbearerFD.

PALLBEARER is Brett Campbell (vocals/guitar), Devin Holt (guitar), Joseph D. Rowland (bass/vocals), and Mark Lierly (drums). The Little Rock, Arkansas based band formed in 2008 and have since released a trio of albums: »Sorrow And Extinction« (2012) and »Foundations Of Burden« (2014) to »Heartless« (2017). PALLBEARER has received widespread praise with Rolling Stone dubbing their music "beautiful melancholia," the New York Times saying, "PALLBEARER takes the genre’s distorted guitars and dread and adds an ambitious element of optimism," and Decibel, who have twice afforded the band their cover slot, declaring the band’s songs both "majestic" and "extraordinary."