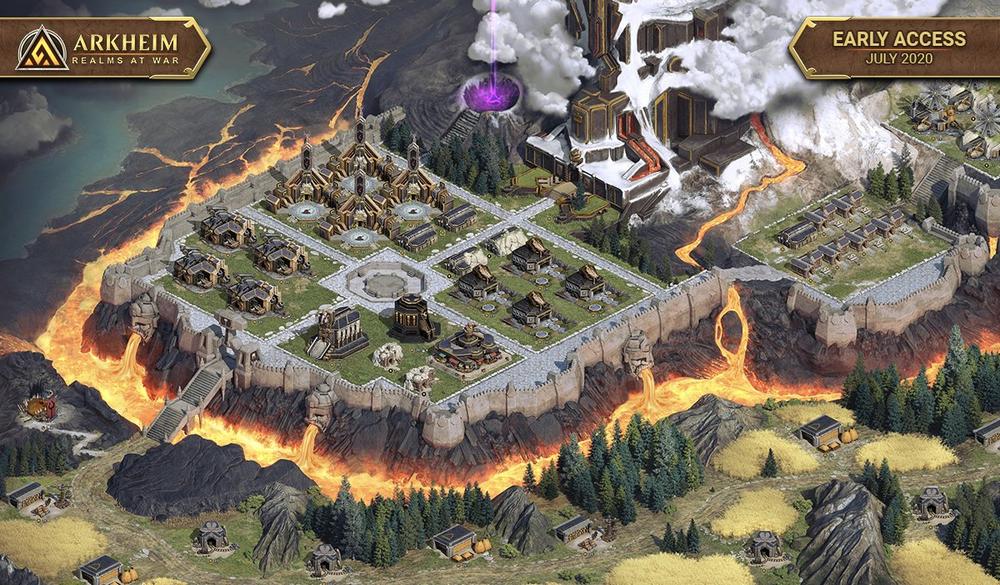 Arkheim – Realms at War integrates all the latest innovations from the top strategy games including a safe single-player progression but is also characterized by two innovative components: team-based multiplayer action combined with massive real-time tactical battles.

"We wanted to design a game that keeps the competitiveness but also caters to players with less time to invest," said Holger Miller, Game Director for Arkheim – Realms at War and one of the founders of Travian Games. "Another unique addition to the genre is that players can’t lose their village and single-player progress. This village is the economic backbone and can’t be attacked."

"To have one of the founders of our company roll up his sleeves and give the traditional genre a good whirl provides great promise," said Frederik Hammes, COO and Managing Director of Travian Games. "When designing Arkheim – Realms at War, our intent was to make accessible the fun and excitement of games like Travian: Legends to a broader audience. We have included all the latest innovations from the genre, but we also wanted to enable players to experience the mayhem of large-scale real-time tactical battles. You won’t find another strategy game like Arkheim – Realms at War where thousands of players interact and visualize their actions in real time over a single map, in a true cross-platform fashion."

Structured in realms, players can choose what role they want to play: a realm leader who is highly active in the game or a realm member who contributes by providing troops and the underlying economy. Players can switch up their focus at any time. This variety of roles and approaches makes the game unique and like nothing you have seen before – without sacrificing the fun that a deep and captivating strategy war game should deliver. All of this is wrapped in a unique fantasy universe reminiscent of Tolkien’s fascinating world of elves and dwarves. Discover the new MMO fantasy war game and battle with thousands of players from all over the world in true cross-platform style – on PC and mobile.

A link to this experience, which very much stays close to the company’s core values and expertise, can be found at play.arkheim.com.

Watch the official release trailer here. To celebrate the launch of the first Arkheim – Realms at War server localized in both English and German, a special behind-the-scenes video showing how the Arkheim – Realms at War team has been working on the new title, including interviews with Game Director Holger Miller and Game Designer Dario Reinhardt, can be watched here.

More details about the game are available on the Arkheim – Realms at War website and you can follow the game on Facebook to receive the latest news.

Travian Games GmbH, based in Munich, is a world-renowned, self-publishing developer of cross-platform games (online and mobile). The company offers its customers complex, multi-layered adventure worlds that inspire players with their gaming depth and guarantee users long-lasting enjoyment. A motivated team develops and markets mobile and online entertainment for all age groups. Here the focus lies on cross-platform strategy games. Travian Games currently offers the following games: Travian: Legends, Rail Nation, Travian Kingdoms, goalunited LEGENDS, Miramagia, Hyperdrome, UnitedGP and Arkheim – Realms at War. They are translated into up to 37 languages and can therefore be enjoyed by fans of long-lasting gaming entertainment all around the world. More information about Travian Games can be found at [url=http://www.traviangames.com]www.traviangames.com[/url].