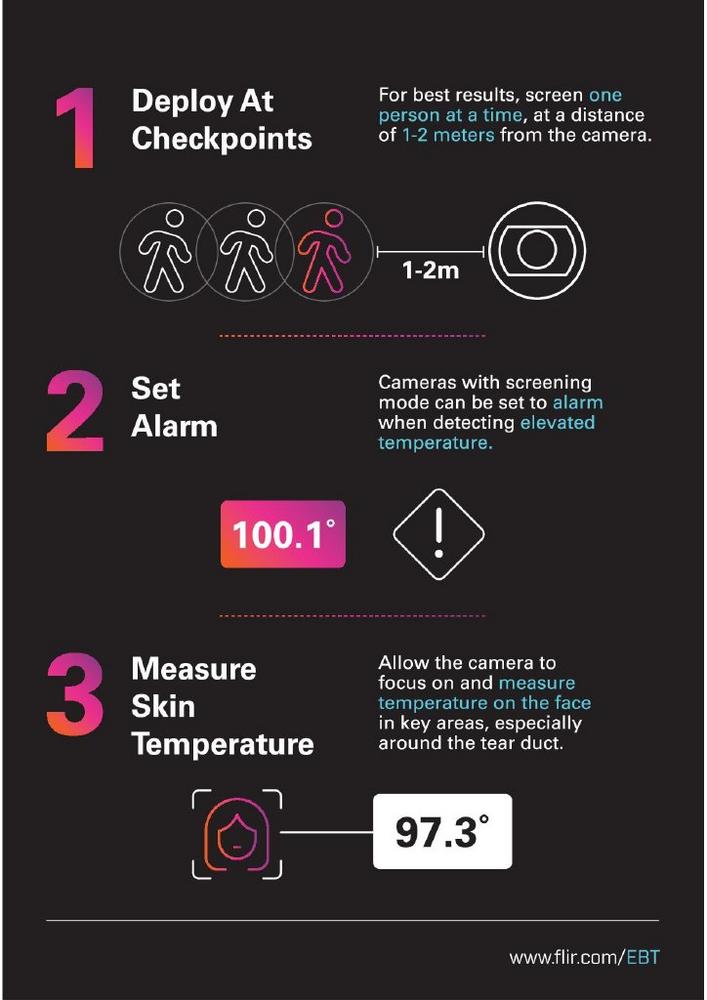 Summary
A thermal imaging camera can be an effective screening device for detecting individuals with an elevated skin temperature. This type of monitoring can provide useful information when used as a screening tool in high-traffic areas to help identify people with an elevated temperature compared to the general population. That individual can then be further screened using other body temperature measuring tools.

Although thermal imaging cameras are primarily designed for industrial and night vision uses, public health organizations have used FLIR cameras around the world at airports, seaports, office buildings and other mass gathering areas to provide rapid, efficient screening in high-traffic areas. FLIR thermal cameras are particularly well suited to this because they can provide a temperature reading of a person’s face in a matter of seconds.

Many of the FLIR thermal cameras that are appropriate for measuring skin temperatures also offer built-in functions like visual and sound alarms that can be set to go off when a certain temperature threshold is exceeded. The operator can then instantly decide whether the subject needs to be referred for further screening with additional temperature measurement tools.

As the thermal imaging camera produces images in near-realtime, the total evaluation process takes mere moments, making thermal imaging technology very useful for rapidly screening large numbers of people. FLIR A320 Tempscreen can be used in high-traffic areas, such as an airport, as part of screening procedures.

Some FLIR camera models offer an elevated skin temperature screening mode that is helpful in comparing the person being screened against the temperature of other people previously screened. When in Screening mode, the operator can save ten thermal images of faces that the camera automatically averages as a reference.

Sound and color alarms
All areas on the subject’s face that are hotter than a predefined temperature value can be displayed as a designated color on the thermal image. This built-in alarm allows users to make an immediate decision regarding whether the subject may need further screening with additional screening tools. In addition, some FLIR cameras are equipped with an audible alarm that can be activated to sound if the detected temperature exceeds a predefined value.

A small investment to enable high-traffic screening
Airports all over the world are using FLIR cameras and have applied this methodology to screen people entering and leaving the country. It is a quick, non-contact method that is safe for both the camera operator and the people being screened.