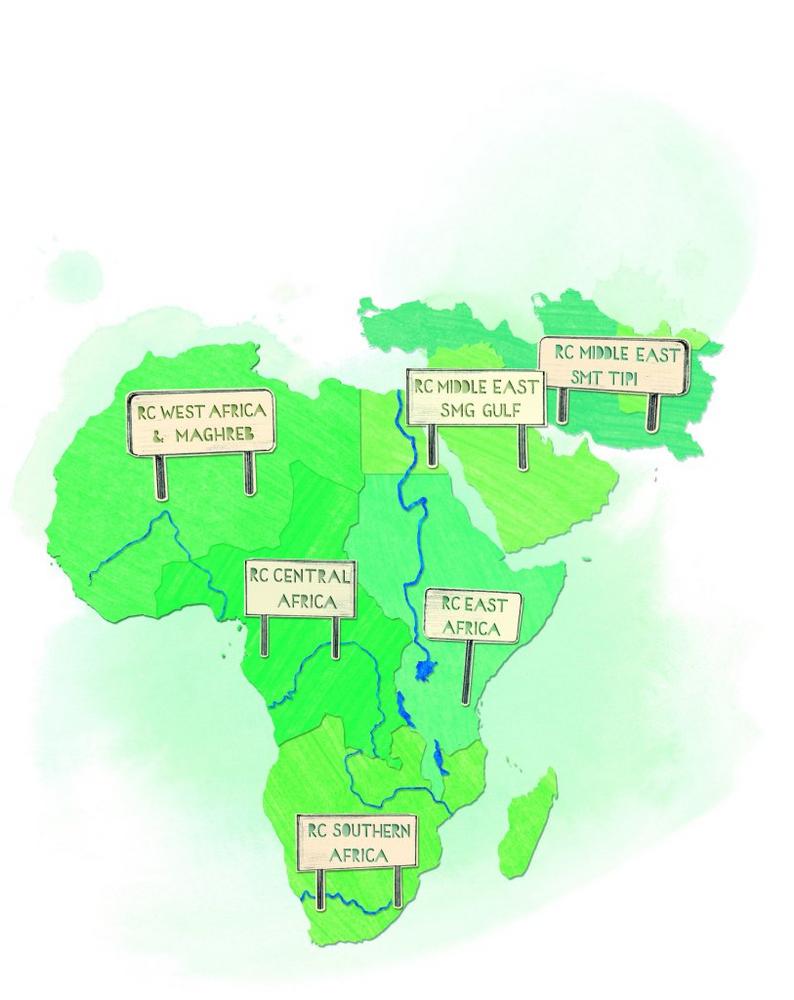 KHS provides quality made in Germany and local service teams on the African continent and in the Middle East. In doing so, the Dortmund systems supplier scores both with global key accounts and small and medium-sized companies and startups. We talk to Markus Auinger, executive vice-president for Market Zone Middle East/Africa, and Jörg Thomas, managing director of KHS South Africa.

What significance does the market zone of Africa and the Middle East hold for KHS?

Auinger: This market zone makes up 15% of KHS’ total sales. The region is the most important market for us as regards PET lines in particular thanks to the strong growth in this segment. Unlike empty cans, PET is readily available throughout the whole of Africa – and PET systems require much less capital than glass lines as the sum of investment is lower. Small and medium-sized startups thus focus on PET, allowing them to generate turnover very quickly. The glass segment is firmly in the hands of our financially strong global key accounts, among them AB InBev, Heineken, Coca-Cola, Diageo, Pepsi and Groupe Castel, that have been present and established in Africa and the Middle East for decades.

How has KHS’ business in Africa and the Middle East developed over the years?

Thomas: KHS enjoys an excellent reputation here for good reason. After all, we were the first engineering company to sell filling systems on this continent. We opened our own branch office in South Africa as early as in 1971. Some machines have been in operation for over 30 years – and are still running round the clock six days a week. On average our installed base is about 17 years old. The machines are serviced by KHS engineers and we can supply the necessary spare parts, regardless of how old the machines are.

Which particular challenges does the region pose?

Auinger: In order to understand the challenges presented by our market zone, you have to bear in mind that on the one hand – take the Emirates, Saudi Arabia and Mauritius, for instance – it includes some of the richest countries in the world. On the other, it also has most of the world’s poor and poorest nations. There’s thus a big economic divide. There’re a lot of underlying problems that have to be dealt with here, too. These include incalculable climatic, economic and political risks, wars, terrorism and famine but also import restrictions and the sugar tax, to name but a few examples. We have to constantly adapt to changing situations and come up with new ideas. It’s therefore all the more important that we’re always accessible for our customers at a local level and able to give them the support they need at all times.

In which countries is KHS particularly strongly represented and why is this so?

Auinger: A few years ago there were still a large number of regions we hadn’t yet covered. Our systems and solutions are now installed in every single country in our sales region and looked after by our engineers. We’re extremely successful where our branch offices are. However, we also have very good business relations with customers in Cameroon, Tanzania, Mozambique, Iraq, Afghanistan, Pakistan and other countries with a turbulent history. At the moment, we’ve a lot to do in the Maghreb states thanks to the strong market growth there. In relation to the entire region, the overall market growth is less strong that you might imagine, however. This is due to the fact that on the one hand you always have countries that are booming. These are juxtaposed by nations on the other that suffer a setback following a very positive development. One example is Angola that for a long time underwent a very good development. But for four years now there’s been more or less nothing doing. Saudi Arabia is investing little at the moment, too.

Which types of machine are in particular demand in Africa and the Middle East? What kinds of beverage are KHS systems used for?

Thomas: In our market zone we do about 95% of our business in turnkey lines – unlike in sales regions such as the USA where up to 50% is attributable to single machines.

Auinger: While non-alcoholic soft drinks in cans and PET bottles are chiefly consumed in the Middle East, on the African continent returnable glass bottles for carbonated beverages have a long tradition. This is clearly changing: in North Africa and the Middle East, for us we see a rapidly growing market for still water in PET bottles. Combined with the increasing demand for soft drinks in the Sub-Sahara, the PET container segment here now has a market share of about 80%.

How do the requirements of bottlers here differ from those in other regions?

Auinger: Our customers need more advice on project planning and implementation. In Africa and the Middle East we’re seen as a guarantee for the success of the beverage producer. This explains why turnkey lines are procured instead of single machines: with these, the responsibility for the functioning of the technology lies with a single source. Our customers value the stability and high efficiency of our machinery and reward this quality with great loyalty. Our customers also require much more support with the maintenance of their plant technology. In Central and East Africa especially we thus conclude extremely highly devised service level agreements, in which we define a certain level of efficiency for our systems over a period of many years.

Which strategy has KHS adopted in this market zone?

Auinger: In 2013 the decision was made to strengthen our sales regions and build up technical expertise and capacity on a local scale. In the same year we founded our own regional center in Kenya. Since then we’ve been continuously checking where branch offices or service hubs would be prudent in line with our market development and then establishing them. In 2016 we split the market zone into six clusters, each of which is managed by a regional center (RC). West Africa and the Maghreb states have been supported from Europe to date but here, too, we’re soon to show local presence by setting up a separate branch office for this region.

Thomas: The aim of these regional hubs – apart from sales organization – is to transfer our local service knowledge to the KHS Group’s entire product portfolio. This allows us to provide proximity to the customer and establish a level of expertise in the region which enables local teams to also install and commission our machinery besides just servicing it. Part of our strategy of regionalization is training, this offered not just to our own employees but also to many local customers. We’ve already opened a KHS training center in South Africa to this end. East and Central Africa are to follow, so that by 2022 we’ll have a training structure in place that covers the entire continent.

Auinger: We’ve also set up a uniform SAP system. This not only facilitates administration and controlling but also functions as a platform for communication to coordinate work locally between the various KHS subsidiaries. Because we’ve identified regionalization as the key to our success, our endeavors have by no means stagnated but instead continue to be permanently further developed and optimized.

What role do employees play in your strategy of regionalization?

Auinger: Up until ten years ago engineers had to be sent out from Europe; we now employ over 250 people throughout the entire region. This number has more than tripled in the last five years. Ninety-five percent of our workforce is comprised of local specialists. There are lots of people here with ambition who have great potential. We’re always nurturing our local personnel by inviting them to Germany for a few weeks each year to take part in training courses, for instance.

What role do the prevention of waste and protection of the climate play on your markets?

Thomas: In Africa people are used to working with returnable bottles in the glass segment. In the fast-growing PET segment it’s often not possible to set up a closed-loop system. More action needs to be taken here. Our big customers practice sustainability only if costs remain neutral for them. The willingness to make improvements is limited as long as governments don’t intervene. That’s why international politics needs to bring pressure to bear on the countries of Africa. There are a number of positive examples, however. In Kenya, for instance, the production, import and use of plastic bags have been prohibited since August 2017. The recycling rate for PET bottles is over 70% in South Africa, with much of the recycled material going to the clothing industry.

Auinger: Our influence as machine manufacturers is limited to the provision of suitable technologies. We’re actively forging ahead with reductions in bottle weight and packaging materials, for example. And the high efficiency and low consumption of our KHS systems also actively contribute to the protection of the climate.

How is the corona crisis affecting Africa and the Middle East in particular and what does this mean for KHS’ business?

Thomas: The wave of infection hit our regions later than Europe. Despite this, very extensive measures were adopted early on in some places, such as in South Africa. This not only introduced one of the world’s strictest lockdowns but also prohibited alcohol and tobacco – not only for consumption but also in production.

Auinger: The corona crisis has hit us hard in our market zone. While our global key accounts have suspended their investments for the time being, our more regional private customers are continuing to invest. We’re also affected by travel restrictions. We’re therefore left to our own local devices much more than before. We can have greater confidence in ourselves and simply get on with the job using our local teams. Our service engineers in Nigeria have thus installed complex machinery and passed the acceptance tests without any outside help. In Saudi Arabia and Mozambique customer employees have completed the commissioning process on their own with the help of our remote support unit. We feel confirmed in our strategy of regionalization adopted over the past few years. It enables us to provide equipment and support to our customers locally despite the current situation.

The KHS Group is one of the leading manufacturers of filling and packaging systems for the beverage and liquid food industries. The KHS Group includes the following companies: parent company KHS GmbH, KHS Corpoplast GmbH and numerous subsidiaries outside Germany, located in Ahmedabad (India), Sarasota and Waukesha (USA), Zinacantepec (Mexico), São Paulo (Brazil) and Suzhou (China).
KHS manufactures modern filling and packaging systems for the high-capacity range at its headquarters in Dortmund, Germany, and at its factories in Bad Kreuznach, Kleve, Worms and Hamburg, where the group’s PET expertise is pooled. The KHS Group is a wholly owned subsidiary of the SDAX-listed Salzgitter AG corporation. In 2019 the KHS Group and its 5,149 employees achieved a turnover of around €1.260 billion.